The Case Against Magnesium Chloride

The Case Against Magnesium Chloride
- It is deadly on your concrete. Why take the risk?

The use of Magnesium Chloride, also sometimes referred to as MAG, as an ice melter to melt the ice on concrete sidewalks, driveways or roads can be deadly.  Why take the risk?  MAG was once thought to be a safe and powerful ice melting solution. However, today there is much scientific information and evidence on the concrete damaging effects of magnesium chloride. XYNYTH Manufacturing Corp., a major North American manufacturer of ice melters, protects its customers by not using any magnesium chloride in its products, because of this overwhelming amount of scientific evidence.

The use of magnesium chloride will cause "scaling" of your concrete. Scaling, as defined by the American Concrete Institute (ACI 302) and the National Ready Mixed Concrete Association in their series of "Concrete In Practice," "is the local flaking or peeling of a finished surface of hardened concrete as a result of freezing and thawing.” 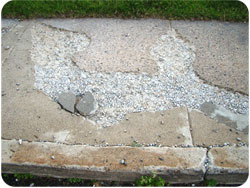 The question always asked is: "so how does the magnesium chloride actually damage the concrete". According to Peter Snow, a concrete specialist from Burns Concrete in Idaho, the problem begins as the magnesium chloride comes into contact with the now deiced concrete surface and remains contained in the melt water, and permeates into the concrete. While deicing salts containing sodium, potassium and calcium are chemically innocuous to concrete, this is not true of magnesium. The magnesium ions accumulate and react with the cementitious compound calcium- silicate-hydrate converting it to magnesium-silicate-hydrate (or a mineral called brucite), which is non-cementitious in nature. In other words, a fundamental major mineralogical product of solidified concrete has now been chemically altered (completely changed). Formation of magnesium-silicatehydrate breaks down the “glue” that binds aggregates together and concrete surfaces begin to deteriorate. The net effect is we now have a chemical and physical attack that concrete is not designed to withstand, nor be subjected to.

Studies, funded by the Iowa Department of Transportation DOT), have been undertaken by the Department of Geological and Atmospheric Sciences at the Iowa State University, concluded that magnesium chloride produced significant concrete crumbling, fracturing and proved to be the most deleterious. There experiments took several cores of actual road concrete and subjected them to the wet/dry freeze thaw cycles they would normally undergo in winter conditions. looked at different de-icers and found that magnesium chloride will actually decrease the service life of concretes.

Interestingly they also found calcium chloride to be the next most destructive salt that they tested, causing discoloration, crumbling and fracturing.

If one takes a moment to check out all the references shown below, they will see much more scientific and empirical evidence illustrating the dangers of magnesium chloride. So the obvious question, even though magnesium chloride may be an inexpensive and powerful ice melter, why take the risk of using it on a concrete surface only to damage it and cause yourself great cost. Even worse the liability to the re-seller who sells the product knowing all the damage it will create.

There are ice melt products on the market today, like Mountain Organic Natural Icemelter or GroundWorks Natural Icemelter, just to name a couple, that an end-user can safely use on their concrete with no damaging side affects.  So again, why take the risk.

In summary, it is strongly recommended by many to stay clear of Magnesium Chloride (MAG) based ice melters, or those blends that contain MAG.

The Role Of Magnesium In Concrete Deterioration---Iowa DOT HR-355